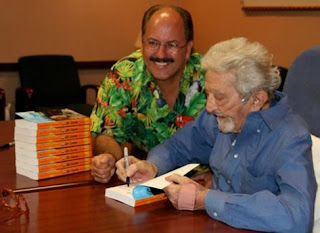 Author Brad Manard shown at a book signing with Captain Tony Tarracino.
Time After Island Time welcomes Brad Manard, author of Life Lessons of a Legend, a book about the late Captain Tony Tarracino. Broadcasting on Radio JimmyDreamz and SandBar Radio.
Produced by Paul Leslie and Jeff Pike
Our special guest on this episode of Time After Island Time is an author in addition to being a musician. His name is Brad Manard and along with Captain Tony Tarracino he penned the book Life Lessons of a Legend, which is the story of Captain Tony sometimes known as the Salt of Key West. So what was it that made Captain Tony so special? What did he do? I think an easier question would be what did Captain Tony not do. As a young man he was a gambler who fled to New Jersey from the Mob. In his life he was a fishing and charter boat captain in Key West. He owned Captain Tony’s Saloon located on Greene Street in Key West—the oldest bar in Florida. His best friends included Tennessee William, Truman Capote, Shel Silverstein and Mel Fisher…just to name a few. The 1970s movie Cuba Crossing was made about his trip to Cuba to transport government assassins. Captain Tony was the surrogate father of singer-songwriter Jimmy Buffett and the inspiration behind his classic song “Last Mango in Paris.” Captain Tony was elected mayor of Key West in 1989 at 73 years old. Captain Tony was also a very prolific man. He fathered 13 children with 50 years separating the oldest and youngest child. Most importantly I believe Captain Tony was a storyteller. Perhaps one of the best and everyone who met him loved him. This episode of Time After Island Time is about the book Life Lessons of a Legend, which is the Captain Tony story. The special guest Brad Manard was described by Captain Tony as the “Michelangelo of Keys literature.” In addition to telling you the story of the writing of this book, this episode is in memorial to Captain Tony Tarracino—a man who touched everyone who met him. Tony lived from August 10, 1916 to November 1, 2008. Let us never say Captain Tony was. Let us only say Captain Tony is…
Our lives change like the weather, but a legend never dies.