Woody Allen is a special guest on Time After Island Time, part 2 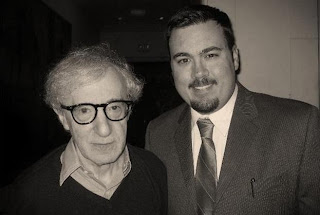 Woody Allen with Paul Leslie of Time After Island Time

Woody Allen is perhaps best known in the motion picture world as the famed director, actor and writer with films loved around the globe, the most recent Vicky Cristina Barcelona as well as classics like Broadway Danny Rose, Annie Hall and Manhattan Murder Mystery. In the second of this 2-part interview with Woody Allen, we speak with him about his other passion...authentic, New Orleans jazz. Woody Allen has been performing on clarinet in the traditional New Orleans style. He performs with the Eddy Davis New Orleans Jazz Band on many Monday evenings in Manhattan throughout the year, and is currently on tour in Europe.

Join us for some of the rarest music around and a side of Woody Allen few get to see! Tune into Time After Island Time from anywhere in the world online via www.radio.jimmydreamz.com

For more information check out www.jerryzigmont.com (Trombonist for the Woody Allen New Orleans Jazz Band.)
Posted by Paul Leslie at 9:25 PM No comments:

Woody Allen is a special guest on Time After Island Time 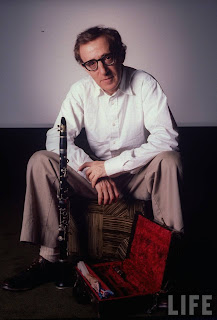 On this episode, we caught up with an International icon. Film director, writer, actor, comedian, and playwright Woody Allen. Most known for his famed motion pictures, (Annie Hall, Manhattan, Sleeper) Woody Allen is one of the most celebrated personalities in film with fans all over the world and Golden Globe, Oscar and Academy Awards to his credit.

In this two part interview, he joins us to discuss in great detail his love for the authentic, traditional jazz of New Orleans. Woody Allen has been playing the clarinet almost every day since his youth. With the Eddy Davis New Orleans Jazz Band he performs almost every Monday night at the Carlyle Hotel in Manhattan on 35 East 76th Street. The band was featured in the documentary film Wild Man Blues and is about to embark on a tour of Europe.

Join us for music from the Eddy Davis New Orleans Jazz Band, as well as the music from yesteryear which was the foundation of jazz. Tune into Time After Island Time from anywhere in the world online via www.radio.jimmydreamz.com

For more information check out www.timeafterislandtime.blogspot.com
and www.jerryzigmont.com (Trombonist for the Woody Allen New Orleans Jazz Band.)
Posted by Paul Leslie at 10:54 AM No comments:

Greg Cohen is a special guest on Time After Island Time 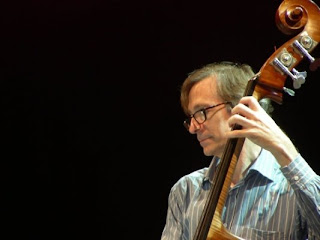 On this episode we meet Greg Cohen, bassist with the Woody Allen & Eddy Davis New Orleans Jazz Band. Cohen is an artist known for not only his humbleness, but also his incredible knowledge of music. Born in Los Angeles, his love for music began early and by 1978 he began working with the legendary Tom Waits.

In 1984 Cohen ended up in New York, where he currently lives. His work has ranged from producing, composing, arranging and performing in public. His bass playing has been featured on artists ranging from Elvis Costello, Willie Nelson, Keith Richards, Lou Reed, and Bob Dylan. His love for many styles lead him to work with the great banjo legend Eddy Davis as well as New Orleans jazz enthusiast Woody Allen, an association that continues to this day. Greg Cohen also performs with avant garde/experimental artist John Zorn. With a variety of artists, his bass playing has been heard all around the globe.

Enjoy this episode and be certain to attend the Woody Allen New Orleans Jazz Band's last American concert of the year this Monday, December 15th at the Carlyle Hotel in New York City!

Tune into Time After Island Time from anywhere in the world on Radio JimmyDreamz via online at www.radio.jimmydreamz.com

For more information check out www.timeafterislandtime.blogspot.com
www.tzadik.com and www.woodyallenband.com
Posted by Paul Leslie at 4:26 PM No comments: